As veterans of theater festivals can testify, fringe shows need a single-minded commitment from their creators. The “let’s put on a show” attitude in 2020 helped a number of theater originators overcome a truly horrible year where small venues and live productions were shut down across the country.

OZ.org premiered at FringeArts’ Philadelphia Fringe Festival in September. The director and writer Amber Kusching envisioned her own interactive, virtual take on Oz. Like most modern adaptations of the first book, the influence of MGM’s iconic The Wizard of Oz as well as Gregory Maguire’s Wicked could be heavily felt in the science fiction spin that she placed on this reimagining of Baum’s first Oz book.

As the play opened, “Dorothee” and the audience were sucked into a Zoom meeting with oddly familiar characters like the robotic 10-MAN, a cowardly guy called Lyman, and the helpful hologram GLINDA. Besetting them all was a certain wicked malware with a familiar cackle to Oz fans.

Performed live, part of the play’s charm came from the opportunities for audience engagement via chat and break rooms. Naturally when a crowd of International Wizard of Oz members burst on the scene one Saturday afternoon, the comments and suggestions were spirited. In fact, one actor remarked later that the Oz Club folks were one of the most participatory groups who attended.

In a year when theaters went dark, Kushing found a way to produce a show that generated interaction between the audience and the actors, something sadly lacking in many streamed experiences. Devoted to creating original works, the 2015 graduate of Montclair State University has had her plays produced more than twenty times in festivals throughout the Northeast. During the summer’s Oz Convention, she discussed her inspirations and challenges in presenting OZ.org with International Wizard of Oz Club Vice President Ryan Bunch (via Zoom of course!). The interview can be found at the Club’s YouTube channel or by clicking on the Oz.org image below.

Based on the one performance seen by this author and a few others reported on by Club members, not all the glitches came from wicked witches. Sometimes computers froze up or people were a bit lost about what to do in the break rooms. But the cast merrily followed their yellow brick information highway and presented Oz in a uniquely 2020 way.

But what would Baum have thought? One suspects that he would have been fascinated by how it all played out. An aficionado of live theater, Baum also proved ready to adopt new technology to reach his audience whenever it appeared. Taking something as ubiquitous the video conference call, and turning it into live entertainment, probably would have tickled the great man’s fancy. As documented in Mark Evan Swartz’s wonderful Oz Before The Rainbow, Baum’s Fairylogue and Radio-Plays (1908) featured a somewhat shaky but functioning mix of film and hand-colored slides. These multimedia shows eventually led to Baum’s involvement in the silent movies with the Oz Film Manufacturing Company.

What Kusching created with OZ.org showed the same entrepreneurial willingness to produce a new way of telling a beloved story.

This article was written for the Baum Bugle, Winter 20/21 edition, published by the International Wizard of Oz Club. 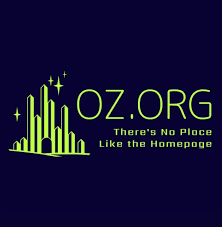