Book-It season opener touches on the lives of Japanese women 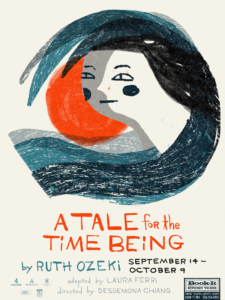 “A Tale for Time Being” connects a Japanese teenager and a Japanese-American novelist in Book-It’s adaptation of Ruth Ozeki’s novel about a mysterious diary that washes onto a Pacific Northwest beach. “I have several personal connections to the book, being Japanese, with the sense of the experience of a young person being in Japan and in the United States,” said Mariko Kita, who plays Ruth, the writer who finds the diary in a "Hello Kitty" lunchbox and puzzles through the story of Nao within. “I also have teenage daughters and it’s interesting how those experiences are shown.”

In Book-It fashion, the actors play both the dialogue and the prose of a book. “I love the Book-It style. I feel comfortable in it. I sort of wonder how you do it in another way. I don’t have any discomfort in flipping from an internal to external dialogue,” said Kita. “I think what is challenging for adaptations in general is staying true to the story. The way that these stories are intermingling is very fantastical and accomplishing that is challenging.”

For Kita, part of the challenge is making her character more of a participant and less of a watcher comes out in this adaptation. “Watching Nao’s story is the flashy stuff. Ruth has kind of lost her mojo and watching it being ignited through these experiences is important for me to convey.”

Another challenge for some the actors was the language, something that was carefully rehearsed to provide a seamlessly switching from Japanese to English. “There’s quite a bit of Japanese in the play,” said Kita. “That’s wonderful but that’s challenge. I speak it fluently but you wouldn’t know that some of the others don’t.”

While the Japanese background of the story as well as its ecological themes will draw many to the Book-It production, Kita also thinks that the emphasis on the female characters is appealing. “I’m always a fan of plays about women. We have to be there for each other,” she said. “I think it hits a lot of those elements that we look for: drama, comedy, pain, and there’s a happy ending.”

“A Tale For Time Being” continues through October 9 at the Center House, 305 Harrison Street, under the Armory at the Seattle Center. There will be a talkback after the October 2 performance. For more information, see Book-It’s website.