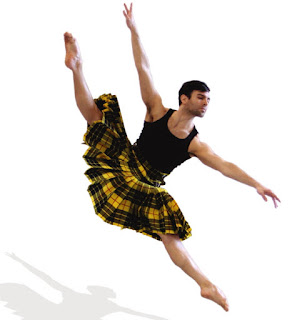 Jonathan Porretta is jumping high to become the King of the Kilt.  For the second year, the Pacific Northwest Ballet principal dancer has donned the plaid for charity, entering Ronald McDonald House's Men In Kilts competition. Votes are made in the form of $25 donations (each "vote" sponsors and sponsors one night of housing for a family).

"Last year, when they phoned the ballet to see if anyone wanted to pose for picture in the kilt, [the development department] immediately emailed me," said Porretta.

Despite being the only guy in a kilt who did a full flying leap in tartan, Porretta failed to capture the crown in 2012. Undaunted and willing to try again, he's back in bright yellow kilt lent by Peter Macleod.

Macleod's wife Rian is a former PNB Governing Board member (2007-2012) and a current PNB STARS member. She's chaired such events as PNB’s First Look Opening Gala and is more than willing to lend her husband's kilt for a good cause.

Also, as Porretta pointed out, this very friendly competition is all about raising money for a good cause. PNB soloist Kylee Kitchens is a regular volunteer and supporter of RMH, said Porretta, and she has organized events there with the other dancers including Porretta.

"We did one event where we cooked dinner for the families, which was great," he said.

So Porretta was happy to pull on the kilt again. This year, he jumped barefoot for that Highland warrior look.  While the photographer told him that they had all the shots they needed after the first couple jumps, he persuaded her to take a few more. After all, Porretta said with his usual twinkle, "it's fun to dance in a kilt."