By Rosemary Jones January 12, 2010
Chad Jennings was set to walk away from acting when his “day job” boss encouraged him to go to one more audition at the 5th Avenue Theatre. That led to a role in Sunday in the Park with George and, much to Jennings’ surprise, an even better paying gig in the national tour of South Pacific. A graduate of Western Washington University, the Yakima native had found regular roles in Seattle’s busy theater scene, working at Wooden O, Village Theatre, and Seattle Children’s Theatre, among others. But, like many actors, the older he got, the gaps between jobs and the low pay began to be less appealing. Without a big breakout role, Jennings started looking for other work. 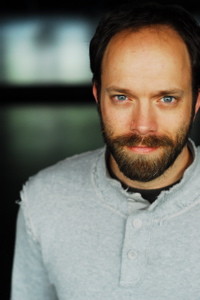 “Basically, I’d given up,” said the 36-year-old Jennings, “and decided to get a ‘real job’ that ended up being right across the street from the 5th Avenue. I was doing tech support, which was a great fit for my skill set. I’m decent around a computer and I enjoyed talking to people.”
Jennings was set for a new career with a little acting on the side, then Sunday came along. The show’s choreographer Christopher Gattelli, who also was working on the South Pacific’s musical staging, suggested Jennings should audition for that show.

“It started at Sunday’s opening night party,” Jennings recalled. “He said that they were looking for guys like me.” Jennings decided to take one more gamble. He flew to New York for the national tour auditions.

“When they had us do a dance number at the audition, I don’t think I did the instructions right even once. At one point, I turned and slammed into the wall!” Jennings revealed. Despite that moment of two left feet, he was cast as Radio Operator Bob McCaffrey. “I also play an officer and I cover four people in this tour.”

With fulltime acting work available, Jennings left tech support to see the country via South Pacific. Not quite as glamorous or warm as might be expected, the tour pulled into Florida during the state's worse cold snap, but enormous fun for the actor. "We have a lot of stage time," he said. "Not only when we are performing but also time when we are there to watch. There's no specific end date to the tour and it's a great gig."

While Jennings had done South Pacific before, he found Bart Sher’s Tony Award winning production had a very different feel. Sher famously peeled away some of the musical theater conventions created by tradition and got back to the original book.

“Happy Talk is such a departure from how it is done in the movie,” Jennings said. “It feels stronger and gives Bloody Mary so much more depth.” Still the biggest moment comes early for Jennings in the “Nothing Like A Dame” number. “The heart of South Pacific is these guys stuck on an island and I love it!” he said.

Having learned to live out of a couple of suitcases, Jennings is looking forward to staying with his sister in Seattle and reconnecting with his theater pals and former cubicle mates during this stop on the tour.

“I hear the people from my office are putting a group to see the show,” he said. “And it will be great to show off the city to the cast. I’m looking forward to seeing Seattle like a tourist.”